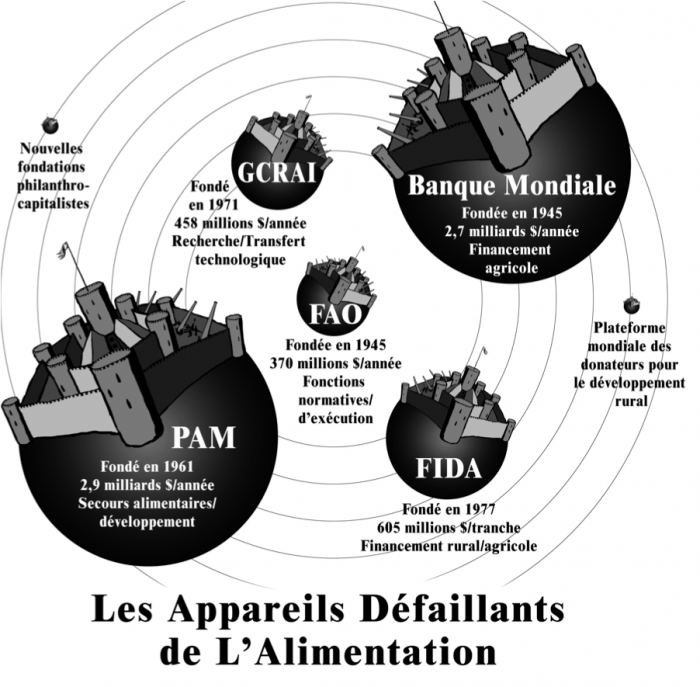 Issue: Food Sovereignty, the political philosophy introduced by Via Campesina, has become a hot geopolitical topic. For the first time in decades, food issues are rising high on the international agenda – pushed there by alarm over climate chaos; booming population growth; the fast-growing appetite for meat and dairy products; and, the land and price pressures imposed by agrofuels. All of this at a time when the major multilateral food and agricultural institutions are reverberating from tough performance reviews and as new philanthro-capitalists ramp up their influence over agriculture and rural development.

Stakes: Climate change is expected to erode the global South’s food production by 20% even as agrofuels claim as much as 12% of arable land and food expenditures (up more than $1 trillion since 2004) keep rising to turn the Millennium Development Goal of halving hunger by 2015 into bitter gruel. The ranks of the hungry are expected to climb from 854 million today to 1.2 billion in 2025.

Actors: No one seems to have seen the problem coming. Governments point the finger at the multilateral institutions they themselves govern while the institutions blame government inertia. Scientists want money for a magic green bullet. Industry does too – but it wants to stay out of the crosshairs. The new mega-foundations want to muscle public and private agendas into a common strategy. Farmers want the Food Sovereignty agenda they adopted in Mali one year ago.

Fora: Both the Biodiversity Convention and the UN’s Commission on Sustainable Development will highlight agriculture in the first half of the year and FAO will convene a global meeting on the major problems in June. Also, during 2008, governments will ponder recent evaluations of IFAD, FAO, CGIAR, the World Bank’s agricultural program, and the World Food Programme’s new strategy. There could be a showdown September 2-4 in Ghana at the High Level OECD-dominated meeting of the 2005 Paris Declaration on Aid Effectiveness – Paris’s “hot cuisine.” Will governments rescue food’s failed estates or will they create a new food cartel? Will organizations of farmers, fishers, indigenous peoples and pastoralists have a seat at the table?