Corporate Power and the Final Frontier in the Commodification of Life 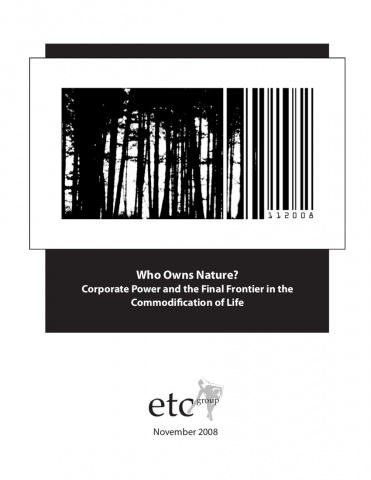 Communiqué number:
100
Problems, Fascinations and Opportunities: A Preface
Three decades ago, humanity had a problem; science had a fascination; and industry had an opportunity. Our problem was injustice. The ranks of the hungry were expanding while the ranks of farmers were thinning. Meanwhile, science was fascinated by biotechnology – the idea that we could genetically engineer crops and livestock (and people) with traits that could overcome all our problems. Agribusiness saw an opportunity to extract the enormous surplus value that was laced throughout the food chain. The hugely decentralized food system held pockets of profit just crying out to be centralized. All industry had to do was convince governments that biotech’s gene revolution could end hunger without harming the environment. Biotechnology was presented as too risky for small companies and too expensive for public researchers. In order to bring this technology to the world, public breeders would have to stop competing with private breeders, regulators would have to look the other way when pesticide companies bought seed companies which, in turn, bought other seed companies. Governments would have to protect industry’s investments by offering patents first on plants and then on genes. Consumer safety regulations, hard-won over the course of a century, would have to yield to genetically modified foods and drugs. Industry got what it wanted. From thousands of seed companies and public breeding institutions three decades ago, ten companies now control more than two thirds of global proprietary seed sales. From dozens of pesticide companies three decades ago, ten now control almost 90% of agrochemical sales worldwide. From almost a thousand biotech startups 15 years ago, ten companies now have three quarters of industry revenue. And, six of the leaders in seeds are also six of the leaders in pesticides and biotech. Over the past three decades, a handful of companies has gained control of that one quarter of the world’s annual biomass (crops, livestock, fisheries, etc.) that has been integrated into the world market economy.
Today, humanity has a problem; science has a fascination; and industry has an opportunity. Our problem is hunger and injustice in a world of cli- mate chaos. Science’s fascination is with convergence at the nano-scale – including the potential to design new life forms from the bottom-up. Industry’s opportunity lies in the three quarters of the world’s biomass that (although used and useful) remains outside the global market economy. With the aid of new technologies, industry believes that any chemical made from the carbon in fosil fuels can be made from the carbon found in plants. The oceans’ algae, the Amazon’s trees and savanna grasses can provide the (purportedly) renewable raw materials to feed people,
fuel cars, manufacture widgets, and cure diseases while fending off global warming. In order for industry to realize this vision, governments must accept that this technology is too expensive. Competitors must be convinced it is too risky. Regulations need to be dismantled and monopoly patents need to be approved.
New technologies don’t have to be socially useful or technically superior in order to be profitable.
And, as it was with biotechnology, the new technologies don’t need to be socially useful or technically superior (i.e., they don’t have to work) in order to be profitable. All they have to do is chase away the competition and coerce governments into surrendering control. Once the market is monopolized, how the technology performs is irrelevant.
Read it in other languages:
French
Related Issues:
Seeds & Genetic Diversity
Farmers' Rights & Food Sovereignty
Synthetic Biology
Genomics & Biotechnology
Patents & Biopiracy
Terminator & New Enclosures
Corporate Concentration