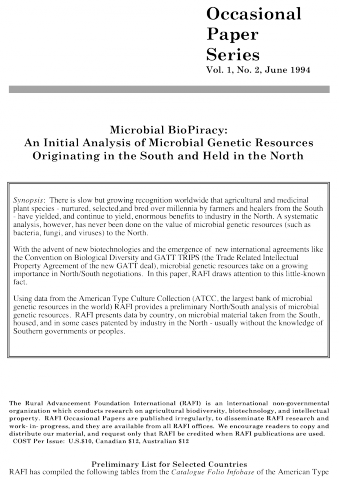 There is slow but growing recognition worldwide that agricultural and medicinal plant species - nurtured, selected,and bred over millennia by farmers and healers from the South - have yielded, and continue to yield, enormous benefits to industry in the North. A systematic analysis, however, has never been done on the value of microbial genetic resources (such as bacteria, fungi, and viruses) to the North.

With the advent of new biotechnologies and the emergence of new international agreements like the Convention on Biological Diversity and GATT TRIPS (the Trade Related Intellectual Property Agreement of the new GATT deal), microbial genetic resources take on a growing importance in North/South negotiations. In this paper, RAFI draws attention to this little-known fact.