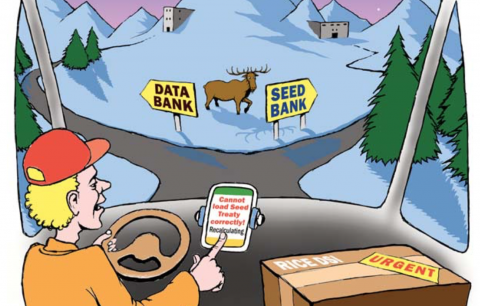 February 12, 2020—A corporate alliance (consisting of Big Ag, the World Economic Forum, philanthro-capitalists and others) have spearheaded three separate initiatives (the Food Systems Summit, restructuring research institutions, acceleration of data collection) which threaten to converge and utterly transform the multilateral food and agriculture system.
If successful, these initiatives would further force-feed the failed industrial food system to the public sector and world agriculture, binding governments to a corporate agenda that marginalizes farmers, civil society, social movements and agroecology.
In a new Communiqué, The Next Agribusiness Takeover, ETC Group describes in detail the history and implications of the three initiatives – for which the World Food Systems Summit is setting the framework.
System change across the multilateral food and agricultural community is much needed, but to adopt the vision of the World Economic Forum and big agribusiness would be a disaster for the Global South, biodiversity and food sovereignty. The resulting shifts will be damaging for the poor, malnourished and peasants farmers, and could derail the advancement of agroecology.
1. The World Food Systems Summit (WFSS)
In October 2019, the UN Secretary-General’s official announced a World Food Systems Summit to be held in New York in 2021, with a pre-conference in Rome. Although the WFSS concept paper calls for “multi-stakeholder” participation, there is no reference to civil society, farmers, fisherfolk or livestock keepers ,and no acknowledgement of Indigenous peoples.
So bold is the agribusiness imprint on the WFSS, that its special champion is a noted industrial agriculture cheerleader.  On February 10, 176 organizations from 83 countries, wrote to condemn the appointment of Agnes Kalibata, President of the Alliance for a Green Revolution in Africa (AGRA), a Gates-funded group “centered on capturing and diverting public resources to benefit large corporate interests,” as Special Envoy from the UN Secretary-General to the 2021 UN Food Systems Summit.
In this same context, the International Planning Committee for Food Sovereignty (IPC) launched a petition raising concerns about the Food Systems Summit and calling for the UN to drop its partnership with the World Economic Forum. The petition states that “the UN-WEF strategic partnership agreement … casts a cloud on the integrity of the UN as a multilateral system.”
2. CGIAR “unification”
A high-powered group led by the Gates and Syngenta Foundations has tabled a plan to restructure public research focused on the Global South via the Consultative Group on International Agricultural Research (CGIAR). If adopted, the CGIAR’s 15 centres would come under the governance of a single board, with power concentrated in a three-person management structure, deliberation and debate would be cut short.
The result: a single corporate entity with stronger-than-ever connections to agribusiness. The CGIAR umbrella currently includes an annual budget of roughly $850 million; approximately 1500 scientists and other professionals; eleven of the world’s most important international gene banks that collect, store and exchange much of the South’s plant breeding material (773,000 seed accessions and counting); training facilities for South scientists; advanced laboratories; and enormous socio-political influence – particularly among the most marginalized G-77 states.
The main element of the unification proposition include:
3. International Digital Council for Food and Agriculture
At the Global Forum on Food and Agriculture in Berlin in 2019, Germany presented an initiative for the establishment of an International Digital Council for Food and Agriculture, reflecting enthusiasm from agribusiness and the World Economic Forum to deploy big data to transform food systems. The proposal highlights the use of data-gathering on a global scale, facilitated by blockchain and cryptocurrencies. These practices would extend to genetic digital sequence information (DSI or digital DNA) and could pre-empt already-contentious access and benefit sharing (ABS) negotiations in the Biodiversity Convention and the FAO Seed Treaty.
The threat to global food systems
The power (and the risks) of the three proposals lies in how they interact: the Summit sets the framework; CGIAR is the delivery system; and Big Data is the product.
Each of the three initiatives described in ETC’s The Next Agribusiness Takeover, carry a pretense of public engagement, and each will assure audiences that their early failures to reach out to real stakeholders have been due to time pressure or accident.
This is manifestly not true. On the contrary, these initiatives will negatively impact on the most important actors in food production, peasants and other small food providers who are responsible for the food of the majority of the worlds’ population.
Once again, the call for real system change, with an agroecological vision at its heart, should be heard – just not the system espoused by agribusiness and philanthro-capitalists, concludes Communiqué 117 by ETC Group.
» Read the Communiqué in full
For interviews and further information:
Neth Daño, Co-Executive Director, ETC Group
Jim Thomas, Co-Executive Director, ETC Group
Verónica Villa, Program Manager, ETC Group
Related Issues:
Farmers' Rights & Food Sovereignty
International Governance
Corporate Concentration
Related Fora:
Food and Agriculture: FAO, CGIAR, CFS