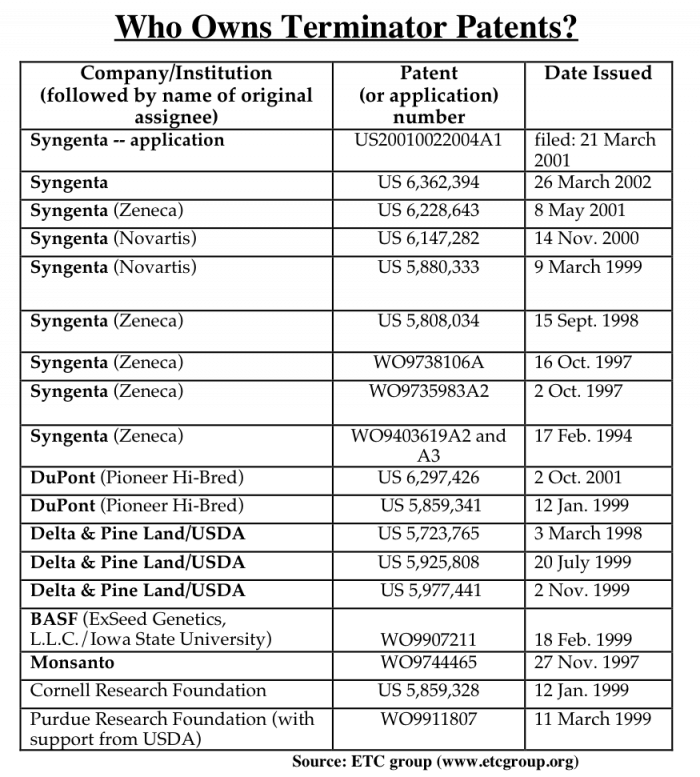 Issue: Since March 1998 the ETC Group (formerly known as RAFI) has been monitoring the efforts of multinational agrochemical and seed corporations to develop Terminator seeds – plants genetically engineered to render sterile seeds (that is, the second generation seeds will not germinate). Terminator technology is being developed as a biological mechanism to extinguish the right of farmers to save and re-plant seeds from their harvest, thus creating greater dependence on the commercial seed market.

Impact: Terminator technology is a threat to food security, food sovereignty and Farmers’ Rights. Together with hundreds of civil society, farmers’ and indigenous peoples’ organizations worldwide, ETC Group has campaigned for a global ban on suicide seeds.

New Developments: While claiming not to have reversed their position against commercialization of Terminator seeds, some Gene Giants are continuing to seek new patents on genetic seed sterilization and others are boldly advocating in favor of GURTs (genetic use restriction technology) in intergovernmental negotiations. In a self-serving but well-reasoned memo, the international body that coordinates plant breeders’ rights, UPOV, concluded earlier this year that Terminator “has considerable disadvantages for society.” Stung by negative publicity related to the escape of DNA from genetically modified (GM) plants, industry continues to “greenwash” Terminator by promoting it as a biosafety tool for containing unwanted geneflow from GM plants. Biotech company Maxygen has unveiled a new technology that is designed to banish foreign DNA from GM plants as a way to silence critics of genetic engineering. ETC Group calls it the “Exorcist” technology.

Policy: As a warm-up for the WTO Ministerial meeting in Cancún in September, ministers of trade, agriculture and the environment from 180 countries have been invited to Sacramento, California for an International Ministerial Conference and Expo on Agricultural Science and Technology, June 23-25, 2003. Sponsored by USDA (owner of 3 Terminator patents), US AID and the US Department of State, the US government should be held accountable for its role in developing and licensing an anti-farmer, anti-diversity technology for use in the developing world. The Subsidiary Body on Scientific, Technical and Technological Advice will review Terminator at its November 2003 meeting in preparation for the March 2004 Conference of the Parties to the Convention on Biological Diversity (CBD) in Kuala Lampur, Malaysia. COP7 may have one last chance to ban genetic seed sterilization before it’s commercialized and released in farmers’ fields. At its next meeting, the FAO Commission on Genetic Resources for Food and Agriculture should pass a resolution condemning Terminator. Negotiations on “The Right to Food” at the UN Human Rights Commission and at FAO must include the inalienable right of farming communities to save, exchange and develop plant varieties without restriction. Terminator must be banned as a violation of Food Sovereignty and The Right to Food.