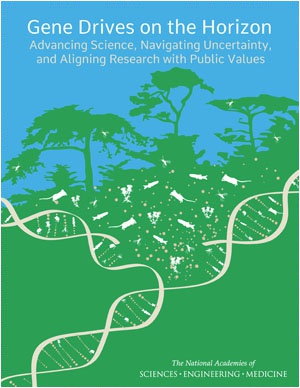 Coming in at over 200 pages, today’s National Academy of Sciences (NAS) report, 'Gene Drives on the Horizon’ is weighty but disappointing. It fails to properly address three of the most pressing issues raised by the controversial new technology of CRISPR-CAS9 gene drives. Dubbed, the ‘mutagenic chain reaction’ by its inventors, RNA-guided gene drives are a high-leverage synthetic biology technology invented only last year. They are designed to relentlessly drive a specific genetic trait through an entire species or population - potentially driving species to extinction. This capability to reshape entire natural populations and ecosystems raises significant threats to peace, biodiversity and food security which is why a high profile study of this kind was mobilized in such record time. Yet, inexplicably the NAS’s report entirely fails to address the problems that will follow from agricultural commercialization of the technology and gives short shrift to the military and security implications of gene drive development. Since commercialization, food security and militarization are among the most explosive issues raised by these developments, their near absence in the report is puzzling. The NAS study was co-funded by DARPA (a US military agency) and the Bill and Melinda Gates Foundation (a global agricultural funder). Both institutions are heavily invested in gene drive research.

"Historians may come to see last year's invention of a working Gene Drive as biology’s ‘nuclear’ moment. Like the the first nuclear chain reaction three quarters of a century ago, the ‘mutagenic chain reaction’ denotes awesome power, potential widespread destruction and has significant geopolitical ramifications” explains Jim Thomas, Programme Director with ETC Group. “The current handful of gene drive pioneers argue that their new tool could wipe out malaria or save endangered birds however it is clear to all that any promises by the inventors come bundled with enormous threats."

Militarization: There are many scenarios for potential weaponisation of gene drives (e.g. via engineered insects, targeting the human microbiome or intentional suppression of food harvests or pollinators) as well as serious potential ramifications from unintended effects. This means that gene drive technology will quickly and inevitably end up controlled by powerful military actors and that decisions on gene drive use and deployment will come to be primarily determined by geopolitical and security concerns (as well as commercial and trade interests). It is relevant that half of the funding for this study came from a US Defense agency (DARPA) who have made it known that they themselves are going all-in on research and development of gene drives and ‘robust’ synthetic organisms.

It is however astonishing that this report (which surveyed governance) entirely failed to mention two of the most relevant international governance instruments that will need to be brought into play to respond to the security and peace threats posed by gene drives. The UN Environmental Modification treaty (ENMOD) was negotiated to address exactly the sort of widespread environmental modifications that gene drives could effect. While ENMOD hasn’t met for some years it could be reconvened fairly easily. The Biological Weapons Convention (BWC) already began to discuss gene drives at its most recent meeting in Geneva last December.

Agricultural Commercialization: The report also entirely fails to acknowledge the strong commercial drivers that may bring gene drives into agricultural use, potentially derailing precautionary governance. While public discussion of gene drives has been intentionally dominated by speculative health and conservation applications, it is the agricultural applications that could eventually come to dominate in view of the commercial interests of large agribusiness companies. The NAS report considered one agricultural case study (case study 6) of engineering pigweed to be susceptible to glyphosate but oddly failed to address how such an application would enhance agricultural monopoly (e.g. for Monsanto). There was also no consideration of how gene drives might transform agriculture and food systems or impact Farmers’ Rights and Food Sovereignty. The report did note that if pigweed in North America was suppressed by a gene drive it could inadvertently end up reducing harvests of amaranth, an important food source in South America.

The lack of of consideration of food security implications is a particularly troubling gap in light of the claims in the existing published patent application on gene drives (WO2015105928). This patent application by the University of Harvard includes a long list of over 50 weeds and almost 200 herbicides that the technology could be used against, thereby laying out a business case for licensing the patent to major agrochemical companies.

"ETC Group understands from its research that both Monsanto and Syngenta are closely watching this technology” explains ETC Group’s Asia Director, Neth Daño. “Neither Harvard nor any other private entity should have that power to license gene drive technology to agribusiness nor indeed anyone else.”

Given the power and significance of these techniques, ETC Group proposes that all intellectual property relating to gene drives should be surrendered to a neutral international body under multilateral UN governance. This would be analogous to the steps that were taken by governments to control intellectual property around nuclear technologies seventy-five years ago. The topic of gene drives should also urgently be taken up by the UN Committee on World Food Security when it meets in Rome in October.

Global Biodiversity Governance: One thing the the NAS report gets right is the importance of global governance for biodiversity implications, stating in several places that “a gene drive knows no political boundaries.” The committee correctly identifies the UN Convention on Biological Diversity (CBD) and its protocols as one of the key international governance bodies that must address gene drive governance (the other three that it fails to mention are ENMOD, the Biological Weapons Convention and the Committee on World Food Security).

ETC Group agrees and believes that strong international governance over gene drive research should be established swiftly at the CBD, beginning with a global moratorium on the release and commercial development of gene drives. This would be in line with this report’s key recommendation that there is insufficient evidence to support the environmental release of gene drives.

ETC Group has more detailed comments on the 200 page NAS report that we are happy to share with reporters.