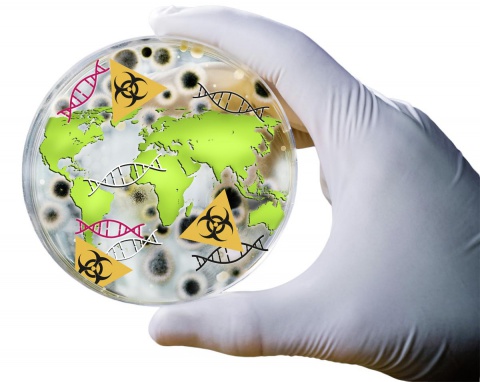 16 May 2014 - Today sees the start of an international call by a broad coalition of
organisations to stop the spread of genetically engineered organisms into the environment.

The initiative says that binding regulations must be implemented to prevent the release of
genetically engineered plants that can persist and invade the environment or lead to transgene
flow into native populations or local varieties at centres of origin and of genetic diversity. The
organisations will be approaching the Parties of the Convention on Biological Diversity (CBD)
and encouraging them to become actively involved. The CBD, under its Cartagena Protocol
on Biosafety, requests that effective measures are taken to protect biodiversity and prevent
unintended transboundary movements of genetically engineered organisms. The call is
supported by Econexus, Ecoropa, ETC Group, European Network of Scientists for Social and
Environmental Responsibility (ENSSER), Friends of the Earth, Europe (FOE), Gene-ethical
Network (GeN), Greenpeace International, Red de Semillas (Spain), Testbiotech (Germany),
the Third World Network and the Unión de Científicos Comprometidos con la Sociedad,
UCCS (Mexico) and others. Further supporters will be asked to join.

“There are already several well-documented examples of genetically engineered plants spreading
uncontrolled into wild populations and ecosystems. There are also cases of repeated transgene
presence in landraces or local varieties of crop plants such as maize in Mexico and rice in China”,
says Elena Alvarez-Buylla from Mexico. “There is a great risk that we will not be able to go back to
the original biodiversity without the bio-active transgenes, which can profoundly alter the dynamics
of wild and cultivated native varieties.” Alvarez-Buylla is a leading Mexican biologist, currently
travelling in Europe and a Member of the Unión de Científicos Comprometidos con la Sociedad,
UCCS (Mexico). She has been involved in several research projects that showed that genetically
engineered plants had contaminated native populations and regional varieties in Mexico.

The Third World Network (TWN) has followed the negotiations on the Cartagena Protocol on
Biosafety very closely for many years. The international organisation is very concerned about the
long-term impact of uncontrolled gene flow of transgenes into the environment: “Article 17 of the
Cartagena Protocol on Biosafety requires Parties to prevent or minimise the risks of unintentional
transboundary movements of genetically engineered organisms, but the current trend of an
increasing spread of these organisms into the environment enhances the potential for genetically
engineered plants to move across borders”, says Lim Li Ching for TWN. “The precautionary
principle can only be implemented if genetically engineered organisms can be retrieved from the
environment in case of emergency. This becomes impossible once transgenes move and accumulate
in wild and landrace varieties.”

The international ETC Group warns that technical approaches as proposed by industry and some
governments will not bring any solutions: “GURTs (genetic use restriction technologies, also
known as “Terminator”), are a set of engineering technologies to make seeds sterile in the second
generation and are proposed by the biotech industry as an answer to “biosafety”, but in reality they
only serve to stop farmers from reproducing seeds. There are scientific reports indicating that
GURTS will not function as predicted and implicate new and additional risks. These technologies
are under a moratorium at the CBD because of the risks they present to biodiversity, indigenous and
local communities, but despite the moratorium some countries are discussing their release”, says
Silvia Ribeiro, ETC Group Latin America Director.

The organisations signing up to the call are aiming to mobilise further support from civil society
and will bring the issue to the meetings of the Parties to the Cartagena Protocol on Biosafety and the
Convention on Biological Diversity, in September/October 2014 in South Korea.