And soon there will be three. Joy of six heads towards a “ménage à trois” 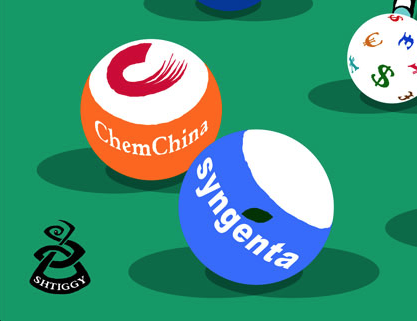 For a decade, six multinationals have controlled 75% of the world’s high-tech seeds and pesticides businesses. Late last year, Dow and DuPont agreed to merge and now state-owned ChemChina is buying Syngenta for $43 billion. This means that Monsanto needs a merger to stay in the game. Or, is the game about to be called?

If regulators allow these two mergers to go through – and that’s by no means certain – then the Big Six will become a Fat Five: Dow-DuPont’s agribusiness spinoff (“Deep Doodoo”?) will lead the pack, followed by ChemChina – already #7 in global pesticides – and Syngenta, which is #1 in pesticides and # 3 in seeds (“Sino-genta”?). That leaves Monsanto in third position trailed by Bayer and BASF.  Monsanto was repeatedly rebuffed by Syngenta, but it desperately needs to step up its pesticides game. Either one or both of Bayer and BASF could spin off their agricultural interests to Monsanto or one of the German Giants might put Monsanto out of its misery with a takeover. Another possibility is that one of the three huge farm machinery companies – most likely Deere & Company – rolls in and digs Monsanto out of its hole (“Demonsanto”?) because of synergies in their Big Data agricultural technologies. Business as usual is not an option.

Would national regulators step aside to watch 75% of global private sector agricultural research fall under the heel of five or fewer enterprises?  Perhaps not if they realize that a third shoe is about to drop. The Dow – DuPont wedding is already raising hackles on both sides of the Atlantic. A ChemChina – Syngenta tryst is, arguably, of less concern since the Chinese company has a comparatively small footprint in agriculture. But once these deals are accepted, Monsanto might make a political case for following in their footsteps – claiming that they must either wed or walk. Allowing the first two mega-mergers, anti-combines offices may feel they have to accept a third.

US and European regulators have a well-deserved reputation for being myopic, moronic and anemic when asked to go toe-to-toe with well-heeled corporate lawyers. Recently, however, the US Department of Justice has put its foot down on two big food company mergers, and Germany has tripped up a couple more. Shareholders can’t be certain the deals will go through.

It is even less likely that a Dow-DuPont merger or another one involving Monsanto would play well in the all-important emerging markets of China, Brazil, India and Argentina. These four countries account for a third of the global pesticide market – the part that is actually growing these days. China won’t nix a hookup involving its own champion, but it has recently blocked a Coca-Cola deal and put serious constraints on two fertilizer deals involving Russian companies. More importantly, China, Brazil and India have national champions – parastatal or private sector – they would like to see, someday, on the global stage. Allowing five – or likely three – multinationals to strengthen their oligopoly in seeds and chemicals would put the kibosh on those aspirations while increasing costs and further decreasing choices for their farmers.

ChemChina’s subsidiary ADAMA is the world’s seventh largest agrochemical company, but the world’s biggest seller of off-patent agrochemicals (more than $3 billion worth in 2014). Also note that just two companies – Syngenta-ChemChina and Dow-DuPont – would account for more than half (51.4%) of global agrochemical sales, based on 2014 sales, pro forma.

Background: The Joy of Six becomes a ménage à trois?

The world’s 6 largest agricultural input enterprises (Monsanto, DuPont, Syngenta, Bayer, BASF and Dow) acquired at least 200 other seed or pesticide companies since the introduction of GM crops 20 years ago[2] and, prior to the current merger talks, these six account for 75% of all private sector agricultural R&D and control 75% of agrochemical sales and 63% of commercial seed sales. Again, in advance of mergers, 3 companies (Monsanto, DuPont and Syngenta) control 55% of commercial seed sales and 51% of crop chemical sales (Syngenta, BASF and Bayer).[3]