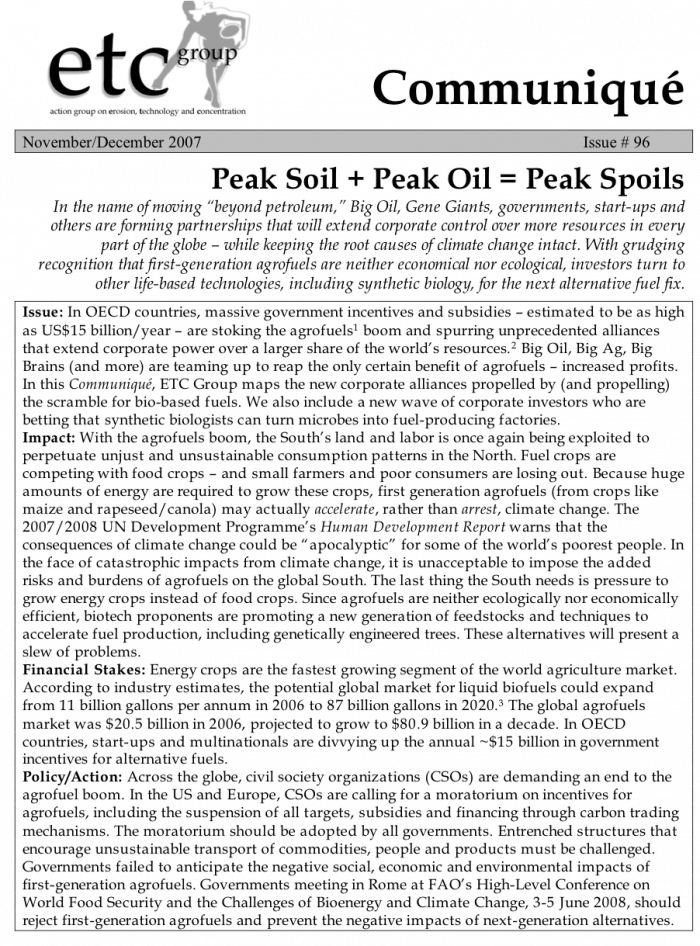 Issue: In OECD countries, massive government incentives and subsidies – estimated to be as high as US$15 billion/year – are stoking the agrofuels1 boom and spurring unprecedented alliances that extend corporate power over a larger share of the world’s resources.2 Big Oil, Big Ag, Big Brains (and more) are teaming up to reap the only certain benefit of agrofuels – increased profits. In this Communiqué, ETC Group maps the new corporate alliances propelled by (and propelling) the scramble for bio-based fuels. We also include a new wave of corporate investors who are betting that synthetic biologists can turn microbes into fuel-producing factories.

Impact: With the agrofuels boom, the South’s land and labor is once again being exploited to perpetuate unjust and unsustainable consumption patterns in the North. Fuel crops are
competing with food crops – and small farmers and poor consumers are losing out. Because huge amounts of energy are required to grow these crops, first generation agrofuels (from crops like maize and rapeseed/canola) may actually accelerate, rather than arrest, climate change. The 2007/2008 UN Development Programme’s Human Development Report warns that the consequences of climate change could be “apocalyptic” for some of the world’s poorest people. In the face of catastrophic impacts from climate change, it is unacceptable to impose the added risks and burdens of agrofuels on the global South. The last thing the South needs is pressure to grow energy crops instead of food crops. Since agrofuels are neither ecologically nor economically efficient, biotech proponents are promoting a new generation of feedstocks and techniques to accelerate fuel production, including genetically engineered trees. These alternatives will present a
slew of problems.

Financial Stakes: Energy crops are the fastest growing segment of the world agriculture market. According to industry estimates, the potential global market for liquid biofuels could expand from 11 billion gallons per annum in 2006 to 87 billion gallons in 2020.3 The global agrofuels market was $20.5 billion in 2006, projected to grow to $80.9 billion in a decade. In OECD countries, start-ups and multinationals are divvying up the annual ~$15 billion in government incentives for alternative fuels.

Policy/Action: Across the globe, civil society organizations (CSOs) are demanding an end to the agrofuel boom. In the US and Europe, CSOs are calling for a moratorium on incentives for agrofuels, including the suspension of all targets, subsidies and financing through carbon trading mechanisms. The moratorium should be adopted by all governments. Entrenched structures that encourage unsustainable transport of commodities, people and products must be challenged. Governments failed to anticipate the negative social, economic and environmental impacts of first-generation agrofuels. Governments meeting in Rome at FAO’s High-Level Conference on World Food Security and the Challenges of Bioenergy and Climate Change, 3-5 June 2008, should reject first-generation agrofuels and prevent the negative impacts of next-generation alternatives.