Stop the spread of synthetic biology 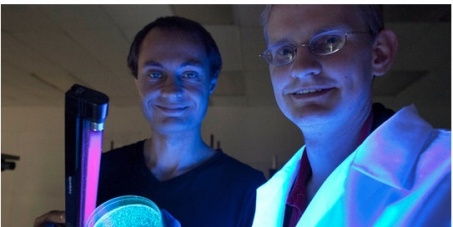 Last Chance for Kickstarter to stop release of risky seeds

There is less than a day to go before the popular crowdfunding site Kickstarter.com hands hundreds of thousands of dollars to a controversial project for the widespread and unregulated distribution of over half a million extreme-bioengineered seeds.  Kickstarter, which stands to make over $22,000 from the project (1), has steadfastly refused to comment on its listing of a project to make and distribute ‘glowing genetically modified plants’ using Synthetic Biology. As the funding deadline approaches, public opposition to the ‘Kickstarter Biohackers’ is growing. On Thursday morning civil society organisation ETC Group, who this week launched a ‘KickStopper’ campaign to directly challenge the project, will submit a petition calling on Kickstarter to update their ethical guidelines to exclude funding of bioengineered organisms. Those guidelines currently forbid Kickstarter from funding such comparatively benign projects as energy drinks and sunglasses. ETC Group contends that the funding of this project could open the floodgates to copycat biohacking projects. The petition through Avaaz.org has gathered over 7000 signatures in 7 days and signatures continue to pour in.

“Kickstarter could still do the right thing and refuse to fund this risky release,” explains ETC Group’s Jim Thomas. “Kickstarter has less than a day to decide what matters most: Does it go after the money it is going to rake in from this and future biohacking projects or does it prioritize protecting our environment as well as its reputation as an ethical social enterprise?”

At the heart of the controversy is the extreme genetic engineering technology of Synthetic Biology which uses artificial DNA to “re-programme” life-forms. According to its founders, the ‘Glowing Plants’ project, which is associated with Synthetic Biology startup Genome Compiler Corporation, was primarily listed on Kickstarter as a means of raising awareness and support for this new technology (2). However the project also promised to mail up to 100 synthetically engineered seeds to anyone who donated at least $40. If Kickstarter funds the project on Friday then the Kickstarter biohackers will be mailing out over 600,000 seeds to 6000 random locations across the USA. This flies in the face of the established norms on synthetic biology governance and the serious concerns of thousands of citizens and organizations. To date, there has never been an intentional environmental release of an organism produced through synthetic biology, and bodies including the United Nations Biodiversity Convention, the US President's Bioethical advisors and the insurance industry have cautioned against environmental release at this time(3). Compounding the controversy, the Kickstarter biohackers have openly said they intend to use a genetic engineering technique called the “gene gun” method that is not covered by existing regulations, thereby intentionally allowing their project to escape oversight, assessment or monitoring.

A public dialogue? Only if it’s real and genuine.

As criticism of the project has grown, the Kickstarter biohackers this week claimed that they now plan to “conduct a public dialogue on the project’s ethical, legal and environmental issues before shipping any seeds.” While ETC Group welcome this proposal, such a dialogue is meaningless unless the following basic conditions are met:

1)    That the dialogue is designed and carried out independently of the Glowing Plants project by a trusted third party and its terms, including which publics are consulted and the design of the dialogue process, are agreed with the project’s detractors, not just the proponents.

2)    That sufficient funds are made available to facilitate proper involvement of the public and of civil society groups.

3)    That the ‘Glowing Plants’ project agrees to abide by any outcome or findings of a genuine public dialogue and refrain from release of synthetic organisms until that time.

Without agreeing to these terms, such a dialogue proposal amounts to empty public relations rhetoric. ETC Group proposes that Kickstarter hold back releasing any funds until such a public dialogue has taken place. For good faith, Kickstarter could also kick in the $22,000 that it is about to raise to fund a genuine independent dialogue. Such a process could also inform its own ethical guidelines around bioengineering projects.

From Kickstarter biohackers to KickStopping Synthetic Biology – a crowdfunding war?

ETC Group, in collaboration with other civil society organizations is now preparing for a longer term campaign to prevent the Kickstarter biohackers from releasing their synthetic biology seeds to the environment. In order to fund that campaign, ETC Group is mounting its own ‘counter-kickstarter’ crowdfunding campaign dubbed KickStopper. Those donating to the KickStopper campaign will receive stickers, t-shirts and help fund the creation of a comic book. Funds will also be used to move forward the campaign in local, national and international arenas. For details of the KickStopper campaign (and to view the accompanying video), see http://www.indiegogo.com/projects/kickstopper-stopping-syn-bio-pollution.

ETC Group originally applied for the KickStopper to be hosted on Kickstarter.com but were turned down.

Full background information can be found at http://www.etcgroup.org/kickstopper or contact:

2.    Glowing Plants Founder Antony Evans told Nature News, “The central goal of the project is to inspire people and educate people about this technology.”

3.    For references to statements by these bodies, see ETC Group Letter to Kickstarter online at http://www.etcgroup.org/content/kickstopper-letter-kickstarter.