Who Will Control Agricultural Inputs? 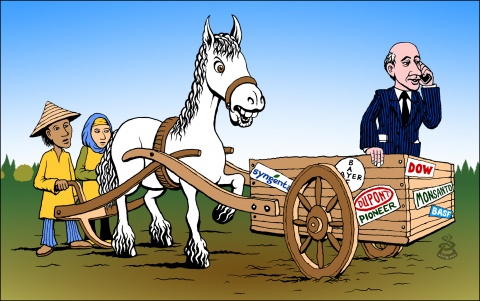 ETC Group publishes its 111th Communiqué today. The 40-page report – “Putting the Cartel before the Horse…Who Will Control Agricultural Inputs?” – provides market data on the world’s major corporate players involved in food and agriculture and analysis of key sectors in the corporate food chain.

““The concentration of corporate power – including the concentration of corporate R&D – belongs at the forefront of any attempts to answer the crucial question of who will feed us in the midst of climate change,” says Kathy Jo Wetter from ETC’s US office. “The latest market figures suggest that cartel arrangements are commonplace and the oligopoly paradigm has moved beyond individual sectors to the entire food system.”

ETC’s report shows that the same six multinational firms (Monsanto, DuPont, Syngenta, Bayer, Dow, and BASF) control 75% of all private sector plant breeding research, 60% of the commercial seed market (100% of the transgenic seed market) and 76% of global agrochemical sales.[i] The report also includes market data for the fertilizer and animal pharmaceutical industries, as well as the highly concentrated livestock genetics industry and the fast-growing aquaculture industry. ETC Group has tracked corporate power related to food and agriculture for more than three decades.

“It’s time to dust off national competition policies and to implement international measures that defend global food security,” continues Wetter. “The argument in favour of ‘too big to fail’ agro-industrial giants rests on a single powerful myth – that unless we intensify industrial food production using the North’s genetically-engineered seeds, pesticides, synthetic fertilizers and corporate breeding stock, the world’s growing population, living in the midst of climate change, will not have food to eat. But the reality is miles from the myth.”

ETC’s report is the first instalment in a “Who Will Control…?” series, which will examine corporate activity, including R&D, in diverse areas such as food retail and processing, pharmaceuticals, mining, energy, climate technologies, among others.

Today’s report is being published together with a poster assessing the capacity of the Industrial “Food Chain” and the Peasant “Food Web” to address climate chaos, based on comprehensive data related to their current performance. The poster, Who will feed us? The industrial food chain or the peasant food web?, is the result of exhaustive research and details how the world’s 3 billion or so indigenous and peasant producers – rural and urban, fishers and pastoralists – not only feed a majority of the world’s people, but also create and conserve most of the world’s biodiversity. The Industrial Food Chain, on the other hand, uses about 70% of the world’s agricultural resources to produce just 30% of our global food supply.

“The peasant food web is largely ignored by or invisible to policymakers dealing with food, farming and climate crises,” asserts Silvia Ribeiro, ETC’s Latin America Director. “This has to change because peasants are the only ones who really have the capacity and the will to feed the hungry – not to mention the rest of us – but they need the means: Food Sovereignty.”

[i] While BASF does not have significant retail seed sales, it is heavily engaged in seed research and has partnerships with several of the other five companies and investments in several start-up enterprises.