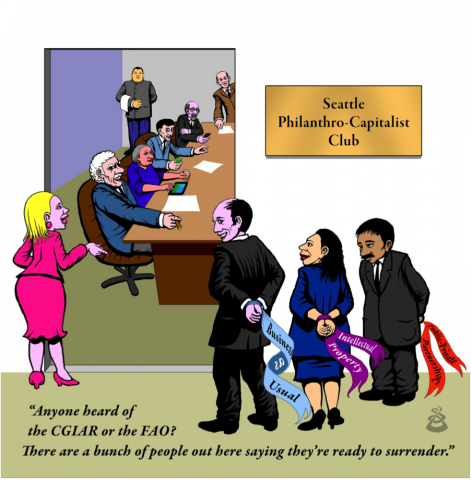 A new 30-page report [available here: The Greed Revolution ] that documents the growing influence of agribusiness on the multilateral food system and the lack of transparency in research funding has been released today by the international civil society organization ETC Group. The Greed Revolution: Mega Foundations, Agribusiness Muscle In On Public Goods, presents three case studies – one involving the UN Food and Agriculture Organization (FAO) and two involving CGIAR Centers (Consultative Group on International Agricultural Research) -- which point to a dangerous trend that will worsen rather than solve the problem of global hunger. The report details, amongst others, the involvement of Nestlé, Heineken, Monsanto, the Bill & Melinda Gates Foundation and Syngenta Foundation.

“It is unacceptable that the UN is giving multinational agribusiness privileged access to alter their agricultural policies,” said Pat Mooney, Executive Director of ETC Group, who has been involved in the field for 40 years. “It is ridiculous that the key organizations responsible for agricultural research have no credible data on the extent of corporate involvement in their work and that CGIAR‟s biggest funder -- at $89 million -- is somebody called „Miscellaneous‟! Governments and UN secretariats have forgotten that their first task is to serve the public - not the profiteers."

The report shows that multinational corporations are now seeing their future profitability in “emerging economies,” and they are finally taking notice of the international institutions that have been quietly working throughout the global South for half a century. However this new interest in UN agencies is causing “mandate-muddle” as companies demand that policy be rewritten to better reflect their interests and privileged access to publicly held germplasm. Public institutions are tending to look the other way when Big Ag harms peasant agriculture.

“Public institutions related to food and agriculture are mandated to support the poor and hungry. Governments need to address the big and small-scale conflicts of interest, beginning with a long overdue investigation of the links between the international public and private sectors in food and agriculture. Based on our initial conversations with UN officials about this research, we are hopeful that this will happen,” concludes Mooney.