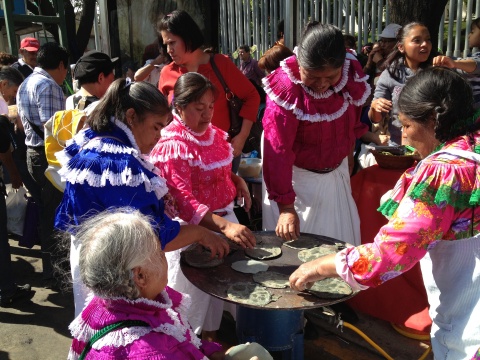 Mexico remains on high alert following the attempts of Monsanto and other agribusiness multinationals to win the government’s approval to plant 2.5 million hectares of transgenic maize in Mexico, the center of origin and diversity of maize.  As ETC wrote last month, approval would allow the boldest coup of a global food crop in history and would threaten biodiversity, farmers’ rights and resilience in the face of climate change. While the outgoing government of Felipe Calderón did not approve the applications before leaving office on November 30th, its last-minute, surreptitious changes to regulatory procedures removed obstacles that could have hindered the new administration’s ability to grant the companies’ requests.

Inside and outside Mexico, voices have decried the attack aimed at the heart of Mexican cultures, food, health and nature. Since mid-November, there have been workshops and public meetings, as well as petitions and protests by farmers, artists, activists and scientists in social and print media and on the radio. La Via Campesina, Grain and ETC Group wrote an open letter to the UN’s Food and Agricultural Organization (FAO) and Convention on Biological Diversity (CBD) asking the multilateral agencies to intervene for the sake of global food security.

As Greenpeace reported at the end of November, the Mexican government quietly changed its regulatory procedures so that the Secretary of the Environment and Natural Resources (Semarnat) is no longer legally bound to take into account the advice of its own and other government agencies’ experts on biosafety. Three government bodies had made critical, extremely cautionary or explicitly negative recommendations when previously consulted about the release of GM maize in Mexico.