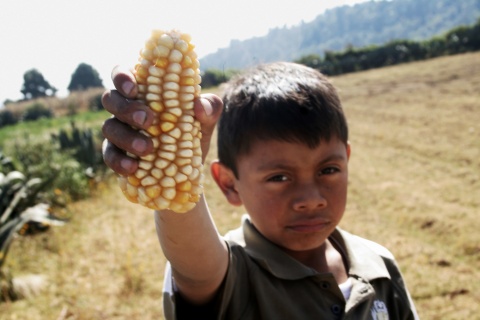 Please take a moment to sign a global petition against the commercialization of GMO maize in Mexico.

Agribusiness giants Monsanto, DuPont and Dow are plotting the boldest coup of a global food crop in history. If their requests to allow a massive commercial planting of genetically modified (GM) maize are approved in the next two weeks by the government of outgoing president Felipe Calderón, this parting gift to the gene giants will amount to a knife in the heart of the center of origin and diversity for maize. The consequences will be grave – and global. With the approvals and December planting deadlines looming, social movements and civil society organizations have called for an end to all GM maize in Mexico. Mexico’s Union of Concerned Scientists (UCCS) has called on the Mexican government to stop the processing of any application for open-field release of GM maize in Mexico. ETC Group joins these calls, and appeals to the UN Food and Agriculture Organization (FAO) and to the UN Convention on Biological Diversity (CBD) – intergovernmental bodies mandated to support food security and biodiversity – to take immediate action.

Outrage and alarm rang out through Mexico when the world’s two largest commercial seed companies, Monsanto and DuPont (whose seed business is known as DuPont Pioneer Hi-Bred International, Inc.), and Dow AgroSciences (the world’s 8th largest seed company) applied to the government for the planting of 2,500,000 hectares (more than 6 million acres) of transgenic maize in Mexico. The land area is massive – about the size of El Salvador. Scientists have identified thousands of peasant varieties of maize, making Mexico the global repository of maize genetic diversity. If the agribusiness applications are approved, it will mark the world’s first commercial-scale planting of genetically modified varieties of a major food crop in its center of origin.

“If Mexico’s government allows this crime of historic significance to happen, GMOs will soon be in the food of the entire Mexican population, and genetic contamination of Mexican peasant varieties will be inevitable. We are talking about damaging more than 7,000 years of indigenous and peasant work that created maize – one of the world’s three most widely eaten crops,” said Verónica Villa from ETC’s Mexico office. “As if this weren’t bad enough, the companies want to plant Monsanto’s herbicide-tolerant maize [Mon603] on more than 1,400,000 hectares. This is the same type of GM maize that has been linked to cancer in rats according to a recently published peer-reviewed study.”

To read the full release, please download the PDF.

A slightly modified version of the release in German can be read here.