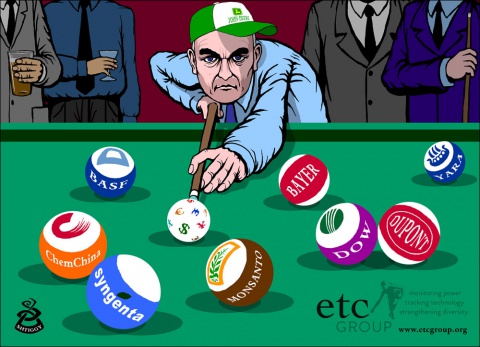 The $130 billion Dow-DuPont merger announced last week has rekindled ChemChina’s $44.6 billion bid for Syngenta which, in turn, may provoke a fourth takeover try by Monsanto. If ChemChina prevails, Monsanto is likely to look for a deal with either BASF or Bayer. If they get their way, the world’s Big Six agricultural input companies controlling 75% of global agricultural R&D may be reduced to three or four. Even if only the Dow-DuPont deal gets past competition regulators, the new enterprise will control 25% of global commercial seed sales and 16% of world pesticide sales, meaning that, together with Monsanto, just two companies would control 51% of seed sales and one quarter of the pesticide market.

But regulatory acceptance is far from a done deal according to a new 20-page report issued today by ETC Group.[1] While US and EU anti-competition watchdogs are likely to roll over and accept the combinations, the growth markets for seeds and pesticides are in the Global South. Brazil, China, India and Argentina combined already account for one third of agrochemical sales worldwide and that share will increase in the future. If any one or two of these countries object, shareholders in the companies involved will get cold feet. ETC Group’s report highlights the truth and consequences of greater corporate control of agriculture in four inputs – seeds, pesticides, fertilizers and farm machinery. Although the deals on the table now are confined to the Big Six and ChemChina, the world’s biggest fertilizer and farm machinery companies may soon get into the act. ETC’s report concludes that farm machinery companies like Deere & Company already have the hardware, are making deep investments in the software (Big Ag Data) and could move to suck up seeds, pesticides and fertilizers into their robotic boxes.

“We expect more Big Ag Mega-Mergers to be announced in the coming weeks, or even days,” notes ETC’s Asia director Neth Daño, “but we should remember that the global South is the prime growth region for industrial agribusiness. The South has a huge stake in all this,” says Daño, “and anti-trust regulators in those markets could and should put their foot down.”

Pat Mooney, ETC’s executive director, returning from the Paris climate conference, warns that unchecked mergers could have devastating impacts on smallholder producers and rural livelihoods. “Peasant organizations around the world will be hit by higher costs, tighter monopolies, and narrow corporate-serving R&D targets. Countries like Brazil, China and India also have national business champions who have nothing to gain from bigger monopolies at home and overseas. Ministers of finance and agriculture in the South have much to lose when they have to subsidize agricultural inputs or crop insurance. The South’s farmers and regulators, together, have good reason to unite and send the agribusinesses un-packing.”

According to agribusiness, the extreme pressures of population growth, limited arable land, and climate chaos require Big Science and Big Money – and that means extreme mergers all along the industrial food chain. “But behind the PR, it’s the bottom line that matters: while CEOs celebrate ‘growth synergies,’ jobs get slashed, research is redundant, and farmers pay more for fewer choices,” explains Silvia Ribeiro, ETC Group’s Latin American director. (DuPont expects 10% of its global work force to be “impacted” as the company “simplifies” its structure.[2]) “These deals aren’t done yet,” adds Ribeiro. “The regulatory review process will take months and that means that those opposed have time to organize.”

[1] Note that the report was completed prior to the Dow–DuPont announcement but includes market share information on several mergers scenarios.