Disruption! A battle for the future of food 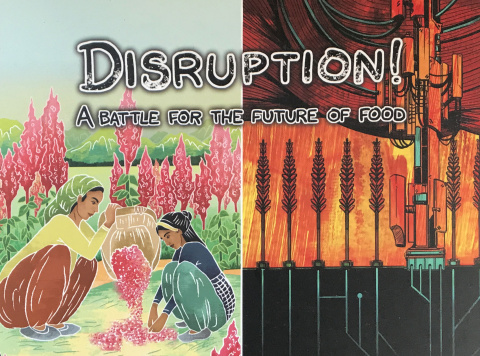 Who decides the future of food? When politicians, companies and others talk about ‘the food system’, they include the work of growing, producing and distributing food. But there is more than one way of organising a food system. Over the last few decades, the way in which people grow, share and eat food around the world has become a tale of two conflicting food systems – which we call the Industrial Food Chain and the Peasant Food Web. We created the game Disruption! to bring to life the tension between these two food systems and reveal the dangerous dynamics it creates.

The Peasant Food Web is critical to feeding humanity: Challenging assumptions about who really ‘feeds the world’, our research shows that the Peasant Food Web provides food for over 70% of the world’s people. But its resilience is threatened by the behaviour of the polluting, wasteful and expensive Industrial Food Chain (for every US$1 consumers pay to Chain retailers, society pays another US$2 for the extensive health and environmental damage caused by the Chain). Practises in the industrial food chain have caused many massive human rights violations and new industrial strategies like digital agriculture pose a major risk to farmers rights.

The Industrial Food Chain already uses more than 75% of the world’s agricultural resources – including land, water and fossil fuels – to feed the equivalent of 30% of the world’s population, mostly people in the global North and in cities around the world. The Chain is constantly looking for more of these resources, and land and water ‘grabbing’ by agribusiness is rife across peasant territories.

This same dynamic plays out in the game as players take the side of the industrial food chain or the peasant food web and compete to control the commons, the resources shared by all players.

In the full length version of the game the corporate players use industrial food doublespeak cards to claim foodholds to control the commons, while players on the side of the peasant food web use cards representing Community Supported Agriculture or agroecological farming practises to establish their own footholds. When the peasant player has established their footholds, a peasant uprising can take place - watch out industrial agriculture!

In this version we’ve also included a short version of the game that is great to play when you don’t have time for a full length game or if you’re playing with younger players. This game uses all the same cards for a fast paced matching game.

The cards in Disruption! illustrate some of the established tricks of industrial agriculture including promoting corporate-friendly ‘market-based’ strategies, such as carbon trading and biodiversity offsets. These allow companies to buy and sell ‘carbon credits’ or the right to destroy biodiversity in certain places. These complex smoke-and-mirrors financial strategies distract from the fact that ‘carbon trading’ does nothing to keep fossil fuels in the ground, and ‘biodiversity offsets’ allow biodiversity destruction to continue, while displacing communities, giving the false illusion that biodiversity can be preserved somewhere else, and allowing biodiversity regulations to be relaxed or avoided. The Chain’s strategies also include the promotion of risky technologies such as genetic engineering, synthetic biology and artificial intelligence as ‘solutions’ to problems that the Chain itself has helped to create, such as climate change, biodiversity loss, and animal and human epidemics and pandemics.

It is the Peasant Food Web that actually has the capacity to keep feeding the world and to cool the planet. Whether it’s a normal or abnormal year, on good or poor soils, women and men working with diverse crops, fisheries and livestock produce more food per hectare than industrial farms. Using agroecological strategies, the Peasant Food Web will consistently produce more food, in ways that are more beneficial to people and planet. Peasant agriculture is also diverse and resilient and better able to survive shocks such as climate change and prevent new epidemics. The Peasant Food Web needs to be supported and scaled up. We need to release food from the shackles of the Industrial Food Chain.

The first 100 donations of over $100 will receive a copy of the game. Learn more and donate.

We are very grateful for the support of Rosa Luxemburg Stiftung-Manila representative office (RLS-Manila) to create the board game. We are also thankful for the support of Bread for the World and Misereor for our work on corporate concentration. We acknowledge the support of the 11th Hour project, Agroecology Fund, CS Fund, Clif Bar Family Foundation, The Nell Newman Foundation, Panta Rhea Foundation and the Keyes Trust Fund for our work on food and agriculture. Their grants allowed us to work on the prototype and the cards used in this board game.

We would also like to thank the artists who worked with us: