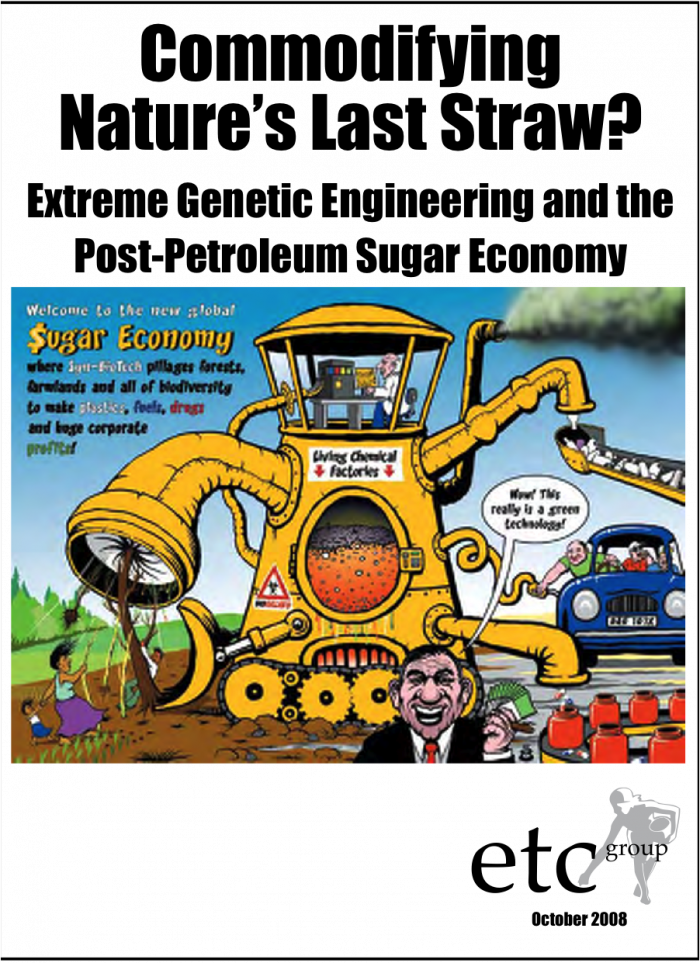 The future bio-economy will rely on “extreme genetic engineering” – a suite of technologies that are still in early stages of development: cheap and fast gene sequencing; made-to-order biological parts; genome engineer- ing and design; nano-scale materials fabrication and operating systems. The common denominator is that all these technologies – biotech, nanotech, synthetic biology – involve engineering of living organisms at the nano-scale. This technology convergence is driv- ing a convergence of corporate power. New bioengineering technologies are attracting billions of dollars in corporate funding from energy, chemical and agri- business giants – including DuPont, BP, Shell, Chevron, Cargill – among others. The 21st century’s bio-based future is called the “sugar economy,” or the “car- bohydrate economy,” because industrial production will be based on biological feedstocks (agricultural crops, grasses, forest residues, plant oils, algae, etc.) whose sugars are extracted, fermented and converted into high-value chemi- cals, polymers or other molecular build- ing blocks. The director of Cargill’s industrial bio-products division explains: “With advances in biotechnology, any chemical made from the carbon in oil could be made from the carbon found in plants.” 1

Biological engineering has the potential to affect virtually every sector of the economy that relies on fossil fuels – not only transportation fuels, but also lastics, paints, cosmetics, adhesives, carpets, textiles and thousands more consumer products. Advocates assure us that the “food vs. fuel” debate will be irrelevant in the future sugar economy, because feedstocks will come from cheap and plentiful “cellulosic bio- mass”– plant matter composed of cel- lulose fibers (including crop residues such as rice straw, corn stalks, wheat straw; wood chips; and dedicated “energy crops” such as switchgrass, fast-growing trees, algae, even mu- nicipal waste). The giant stumbling block is that it currently requires a lot of energy to break down some biological feedstocks into sugar, and traditional chemistry has failed to provide an eco- nomical process. Proponents insist that “next generation” feedstocks will use old and new biotechnologies, as well as break-through fermentation tech- nologies, to succeed where chemistry failed.

What is the sugar economy?
Syn Bio enthusiasts envision a post-petroleum era in which industrial produc- tion is fueled by sugars extracted from biological feedstocks (biomass). The biotech industry’s bioeconomy vision includes a network of biorefineries, where extracted plant sugars are fermented in vats filled with genetically engineered – and one day, fully synthetic – microbes. The microbes function as “living chemical factories,” converting sugars into high-value molecules – the build- ing blocks for fuels, energy, plastic, chemicals and more. Theoretically, any product made from petrochemicals could also be made from sugar using this biological manufacturing approach.