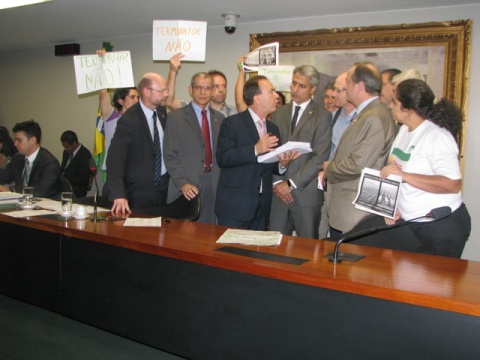 After promising on World Food Day (October 16) to block legislation that would legalize the planting of Terminator seeds in Brazil, the country’s Judicial Commission is set to approve suicide seeds as a Christmas gift to Monsanto, DuPont and Syngenta.

Intense internal and external pressure in mid-October forced the Brazilian Congress to pull back from adopting pro-Terminator legislation, and the Judicial Commission’s Chair pledged never to allow legislation while at his post. Now, the same chair will entertain a motion Wednesday to accept Terminator seeds, making Brazil the first country in the world to defy a 13-year-old UN moratorium on the use of the technology. “If the Commission passes the bill this week,” says Centro Ecológico’s Maria José Guazzelli, “the Congress could make it law after it reconvenes in February. While most of Brazil is celebrating a Christmas birth, the seed multinationals will be celebrating the death of the 10,000-year right of farmers to save seeds.”

If the bill is passed this week (the Judicial Commission meets Wednesday and Thursday), ETC Group expects the Brazilian government to take a series of incremental steps that will orchestrate the collapse of the 193-country consensus moratorium when the UN Convention on Biological Diversity meets for its biennial conference in Korea in October 2014:

First, the government will announce that adoption by the Judicial Commission does not necessarily mean adoption by the Congress. Next, the government will announce that it will limit, through regulation, the application of Terminator technologies to special circumstances and repeat its long-standing support of the UN moratorium. Later, the government will agree that Terminator seeds can be used on GM trees to prevent widespread contamination in the Amazon. This will be described as an environmentally beneficial initiative, disguising the intent to allow the Amazon’s biodiversity to be replaced with GM tree plantations.

Monsanto, DuPont and Syngenta – all of whom have pledged to never sell Terminator seeds to farmers – will express their sympathy for the government’s difficult situation regarding the spread of GM tree pollen and agree to act responsibly. Although the 3 companies that control 54% of global commercial seed sales all have a stable of Terminator patents, they will move cautiously to multiply Terminator seeds and prepare them for market over the next 2-3 years.

In the meantime, not wanting to be seen as a “rogue state,” Brazil will propose to “protect” the Biodiversity Convention’s global moratorium by “clarifying language” that will allow states to commercialize Terminator under special conditions such as GM trees or during food security emergencies. This will cue the global seed trade to introduce all of its latest commercial traits only on the Terminator platform – making them available only for seeds that die at harvest time.

The so-called Gene Giants may take advantage of Brazil’s clout in the global South to roll out “Terminator Plus” – next generation “zombie” seeds whose sterility can be reversed via a proprietary chemical bath. This combines the maximum biological monopoly with the maximum corporate profit since companies will not even have to multiply and market seed every growing season.

Already, almost 30,000 people in Brazil and around the world have signed a petition* addressed to the Chair of the Judicial Commission reminding him of his promise not to allow suicide seeds and calling upon the government to honor its commitment to the United Nations. Around the world, peasant and civil society organizations are contacting Brazilian embassies to express their alarm.

For non-Portuguese speakers: in order to sign to the petition on change.org, you must enter your first name (Nome), last name (Sobrenome), email address, street address (Endereço), city (Cidade), state (Estado), zip code (CEP); tick the first box if you want to receive mailings from change.org; tick the second box if you want to receive updates on the Terminator issue.