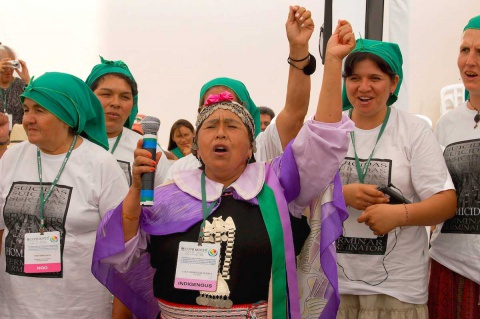 It's usually the case at ETC that when we encounter success, we've usually already moved on to the next campaign. But in our 40th year, we decided to take a moment to celebrate by looking back at some of our favourite wins. We like them all, so they are presented here in roughly chronological order.

In 1981, ETC Group (then RAFI) began pushing for the creation of a UN Commission to focus on seeds as a political as well as an ecological issue. In ‘83, we got an Intergovernmental Commission; recognition of Farmers Rights came in ‘88; a global intergovernmental strategy to conserve genetic resources in 96; and in 2004, after years of civil society mobilizations, social movement pressure and international negotiations, the International Treaty on Plant Genetic Resources for Food and Agriculture (commonly known as the Seed Treaty) came into force, including recognition, in principle, of Farmers’ Right to save and exchange seeds.

In the early 1990s, ETC tracked a US government-sponsored effort to collect DNA samples from more than 700 Indigenous communities. When some of those samples turned into patents held by the US government, ETC led a challenge to the Human Genome Diversity Project, briefing leaders from the affected Indigenous Peoples, and culminating in a confrontation with US Secretary of Commerce Ron Brown on the steps of the WTO in Geneva. The US government pledged to stop the patenting and the project went bankrupt after millions in government funding were withdrawn.

5. Keeping civil society ahead of the curve

ETC’s founding meeting in 1977 in the Qu’Appelle Valley, Saskatchewan, was the first international meeting to address seeds as a political issue. By closely tracking corporate activity and global economic and technological trends, ETC has been able to act as an early warning system for civil society and movements worldwide. The founding meeting was called in response to the then-new trend of pesticide companies acquiring seed companies, and a few years later ETC sounded the warning that the emerging biotech industry would develop herbicide-tolerant GM plant varieties – over a decade before they hit the market. ETC and its closest allies have hosted once-a-decade civil society gatherings that have put technological trends like nanotechnology, synthetic biology, geoengineering, big data, artificial intelligence and technological convergence on the radar of hundreds of movement and civil society organizations globally.

In the 1970s , ETC realized that corporations were ‘patenting’ the traditional knowledge and crop varieties bred by peasants and Indigenous peoples, a practice ETC dubbed ‘biopiracy’. ETC spent years chasing dozens of companies that were committing biopiracy around the world. Working with allies, we were successful in shutting down hundreds of such patents, including Monsanto’s claim to all GMO soy and cotton, and a bold attempt by one university to monopolize dozens of traditional varieties of Andean quinoa.

In 1998, ETC researcher and co-founder, Hope Shand discovered a patent for a ‘Technology Protection System’ designed to render seeds sterile at harvest time. ETC quickly renamed it the Terminator Seed, and global outrage followed. In 2000, ETC and allies surprised Monsanto and the other Gene Giants by negotiating a global moratorium on the use of Terminator technology. In 2006, however, a small group of countries led by Canada and the US mounted a sneak counterattack, slipping neutralizing language into a document that passed through UN negotiations. The response was swift: thousands of peasants mobilized by Via Campesina surrounded the negotiations in Brazil and mounted an unprecedented protest inside the conference hall. Through sheer people power, the attempted coup was reversed, and the moratorium was strengthened as the Gene Giants committed to not commercializing Terminator seeds.

In 2004, global gene giant Syngenta was attempting to claim monopoly control of DNA that regulates flowering in a wide variety of crops, including rice and wheat. The patent, which would have taken effect in over 100 countries, was so broadly written that it extended monopoly control to plant species not yet discovered. ETC quickly named the patent the Daisy Cutter, and led a campaign to pressure Syngenta to give it up. After global pressure from peasants’ organizations, trade unions and CSOs, the Swiss company agreed to let its patent lapse.

ETC started tracking geoengineering more than a decade ago , but the issue heated up in 2007, with a report ‘Gambling with Gaia’ calling for international regulatory action on attempts to techno-fix the climate instead of reducing emissions. A month later, a private company called Planktos announced a major Ocean Fertilization experiment near the Galapagos Islands, and ETC led a sprawling coalition of civil society groups to shut it down. By the end of the year, ETC and allies were well on their way to establishing moratoria on Ocean Fertilization at the London Convention on Ocean Dumping and the UN Convention on Biodiversity (CBD), which were formally adopted. In the ensuing years, ETC mobilized civil society and regional groups to battle Ocean Fertilization in South Africa, Haida Gwaii and the Philippines, successfully cancelled a Solar Geoengineering experiment in the UK, and helped establish a de facto global moratorium on all uncontrolled geoengineering at the Biodiversity Convention in 2010.

From Emergency Exits to Illuminated Pathways: the decades to come

While we’re proud of our role in slowing down or limiting the convergence of technology and corporate power, we know that these victories slow, but don’t reverse, the larger trends.

For the next 40 years, we’re looking to broaden our approach to build institutional people-power to evaluate technologies and find humane pathways out of the mess they are creating. To learn more about where we’re heading for the next 40, check out the 2040 Fund.